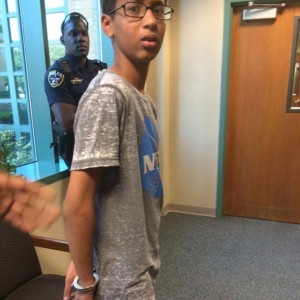 Well thank God being a geek wasn’t a crime back when I was in high school, or all my friends and I would have all been arrested. Can you believe this shit? That high school freshman there in the NASA shirt was arrested for bringing a homemade clock to school. I don’t know what pisses me off more: the obvious racism (the boy’s name is Ahmed Mohamed) or the way they could have killed this young man’s love for science and innovation. Face it, if this had happened fifteen years ago, no one would have heard about it and he would have learned a harsh lesson: a career in science isn’t for people who look like you.

I’m glad that there’s enough public outcry that Mohamed will probably come out on top, but how many other kids are bullied by the authorities for non-crimes and minor infractions? Time for a change, people. #istandwithahmed